Find your way in and around Paris Orly airport. Here is information about airport terminals layout, transport maps, driving directions and connection between terminals.

Book your taxi in advance

Book your cab in advance and get a hassle free ride to Paris city center. Flat rate & meet and greet service. 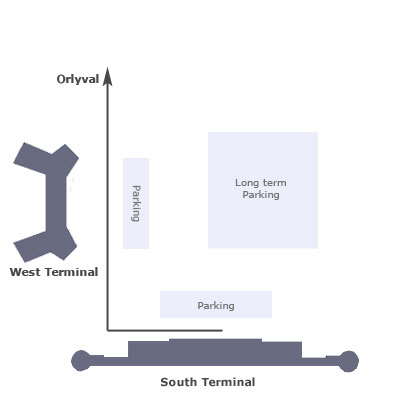 Orly West terminal is quite simple and travellers should'nt be lost on arrival. The parking facilities are located just in front of the Terminal - mainly dedicated to Air France and Air Portugal flights, Iberia and other airlines.

Terminal South is on four levels plus the basement with car parking facilities (Short term). Ground level welcomes Arrivals and baggage claim but also Check in, Departures floor is located at level 1. Many airlines are operating from South Terminal including Air Caraïbes, Norwegian, Transavia, ...

From Paris, take the A6 Highway via Porte d'Orleans (A6a) in the South of the city, or the Porte d'Italie (A6b) in the South East, then take the A106 highway following 'Aéroport d'Orly', which is clearly indicated. The distance between Paris city center and Orly airport is 12km. Travel time may vary from 20 to 40 minutes depending on road traffic conditions.

Transferring between flights ? Connection between terminals is easy and free with the Orlyval Express train. It runs from 6am to 11pm. Frequency is one train every 4 to 7 minutes depending on the hour of the day. Orlyval train station is situated between gate K and J in South terminal and just near gare A in West terminal.

Getting to/from the airport

Paris Orly airport (ORY) is located 12km in the south of Paris. Bus & coach, shuttle, taxi, train, ... Travellers have plenty of choices to get to and from the airport.

Getting to/from the airport